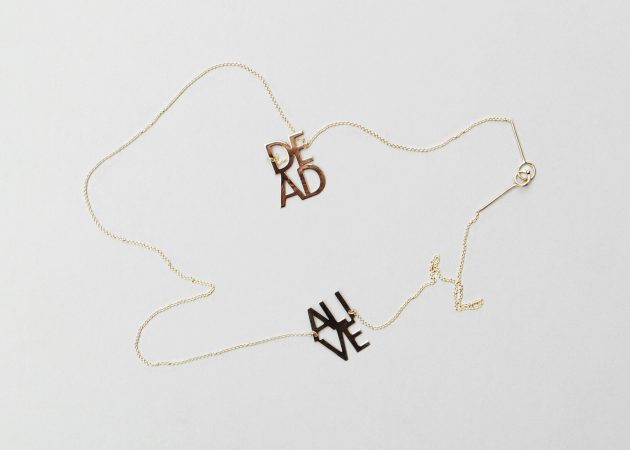 The ANTONYM series is a set of necklaces I am doing for the artist Saâdane Afif. They are produced as an edition of 2 + 2 A.P. and they are only available at the gallery Mehdi Chouakri. They come with a certificate and are numbered. For any inquiry you can of course email us and we´ll put you in touch with the gallery or provide pictures.

Saâdane Afif: “My work now is not depending on objects: it develops itself through the accumulation or interweaving of elements, which may be more or less visible” wrote Saâdane Afif in 2010. The idea of an exhibition in form of a retail shop seems therefore a logical extension of his interdisciplinary artistic work, developed by Afif over a longer period of time in form of installations, objects, neon pieces, posters, performances or poetry.

A major aspect of Saâdane Afif’s art is the reciprocal inclusion of different authors and media, thus constantly allowing new forms of interpretation and appearance. The occasion of an exhibition or of a performance may therefore serve as a mere catalyst. Also typical for Afif is his strategy of quoting art history. Not only does he pick up ideas of Conceptual or Appropriation Art, but directly incorporates historical role models like André Cadere, Marcel Duchamp or Lawrence Weiner as well. But he also keeps coming back to past works of his own, that way transforming their aggregate state. This brings self referential elements of earlier works to light, and the artworks of Afif may well own various identities whose mutations share the same DNA.

The exhibition Goods (Posters, Multiples, Books, Records, and More) shows the large spectrum of Saâdane A f’s Œuvre: The main space presents posters, which he designed for his various exhibitions and performances. Here Afif uses posters as a seemingly everyday consumer culture device but at the same time one of his very own art form. Since his rst poster “Lyrics”, designed in 2005 for his one-man show at the Palais de Tokyo in Paris, Afif’s posters all combine his interest in “remakes” with the idea of “authenticity” and “authorship”. They somehow are a kind of “material sounding-board” or “trace” of such immaterial art forms, including all the different people involved. All information about the various event locations, curators, performers and partners become visible and documented.

The exhibition also shows – next to new objects – a number of works from previous years. They too re ect Afif’s method to welcome in uences of outside, like artists, architects, designers, or manufacturers. Simultaneously this method automatically draws connections to art history, pop music, and everyday culture.
The exhibition does not limit itself to the presentation of artefacts, but widens up by incorporating also other artistic elds: a book signing session, a record introduction, and the official introduction of Afif’s collaboration with the designer Sakia Diez.

Saâdane Afif (1970 in Vendôme, France) studied until 1995 at the École des Beaux-Arts in Bourges, and until 1998 in Nantes. He lives and works in Berlin. In 2009 he was honored with the Prix Marcel Duchamp, to be followed in 2012 with the award of the Günter-Peill-Stiftung, and in 2015 with the Prix Meurice pour l’art contemporain. His work is going to be shown in various upcoming exhibitions: 2017 La Panacée, Montpellier; 2018 WIELS, Brussels, and Kunsthalle Wien, Vienna.

The opening on September 15th at the Galerie Mehdi Chouakri will also celebrate the presentation of a golden necklace created by Saâdane Afif in collaboration with the designer Saskia Diez, as well as the introduction of Lyric Records, Afif’s new record label, together with the artist signing his latest catalogue “Fountain” by b. frank books.